What Cantonese romanisation system is this? 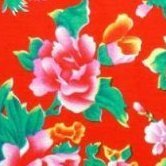